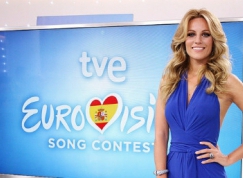 Spain's national public broadcaster has released the much anticipated song, Amanecer (Daybreak), which will be sung by Edurne at this year's Eurovision Song Contest.

Edurne, who rose to fame in 2005 after appearing on a TV talent show, will compete for Spain in the Eurovision Song Contest on May 23rd in Vienna, singing Amanecer (Daybreak), an epic ballad of lost love.

This year's contest will be held in Vienna after Austrian drag star Conchita Wurst triumphed with the Bond-esque ballad Rise Like a Phoenix.

Spanish entries are renowned for singing in their mother tongue, and this year is no exception; Amanecer is sung entirely in Spanish.

"Daybreak is a cry of pain, but also about overcoming that pain," Edurne told Spanish national public broadcaster, TVE.

The song was written by Tony Sánchez-Ohlsson, no stranger to Eurovision; the Spanish producer has written a number of previous entries such as Pastora Soler's 2012 entry Quédate conmigo (Stay with Me).

Edurne was announced as this year's Eurovision entry on January 14th. The announcement had to be brought forward after the news was leaked online, by the singer herself.

TVE announced that this year, they will broadcast the two semi-finals, on May 19th and 21st to "build expectation" among viewers before the grand final on Saturday May 23rd.