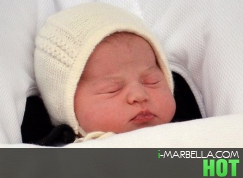 
The Duke and Duchess of Cambridge have spent the first night with their new baby daughter at Kensington Palace.

The name of their second child -- sister to Prince George -- could be announced later and members of the Royal Family and the duchess's parents may visit.

The princess, who is fourth in line to the throne, was delivered at 08:34 BST on Saturday at St Mary's Hospital in London, and weighed 8lbs 3oz (3.7kg).

Tower Bridge was among several London landmarks lit up in pink in her honour.

Trafalgar Square's fountains and the London Eye were also illuminated on Saturday night to mark the birth.

The Cambridges will spend the next few days at Kensington Palace before they are expected to travel to their country home Anmer Hall on the Queen's Sandringham estate in Norfolk.

Bookmakers have said Charlotte and Alice have emerged as the favourite names for the princess, followed by Olivia, Victoria, and Elizabeth.

A spokeswoman for Ladbrokes said: "We've never known a day of royal speculation like it. Charlotte is the new favourite, but Olivia is the name on the nation's lips."