New Year's Eve celebrations usher in 2012 across the world 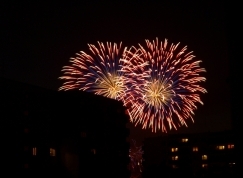 
Fireworks at centrepiece of traditional parties in cities across the globe, with 250,000 expected in central London.

Millions of revellers across the world are celebrating the end of 2011 and the start of 2012. In New Zealand a firework display off Auckland's Sky Tower at midnight (1100 GMT) saw in the new year. In Australia a spectacular fireworks display was held in Sydney's harbour.

The South Pacific islands of Samoa and Tokelau were the first to see in 2012 after skipping a day by jumping west across the international dateline. The change effectively erases Friday 30 December 2011 from their calendars. In Brazil, revellers are set to enjoy a fireworks display on the beaches of Rio de Janeiro.

Hundreds of thousands of people are expected to pack into New York's Times Square for the ceremonial ball-dropping at midnight.

In the UK, hundreds of thousands of people will gather in central London where large numbers are expected to watch the London Eye fireworks display. The South Bank area around the London Eye will be one of the focal points for the celebrations, with Trafalgar Square another popular place for revellers to gather.

Up to 250,000 people are expected to watch the Thames-side fireworks. There will be 12,000 fireworks, producing 50,000 projectiles, launched during the display, which is triggered by Big Ben's chimes and lasts for 11 minutes and 15 seconds.

All travel in London will be free from 11.45pm until 4.30am on New Year's Day. Road closures will be in place in the city from 4pm. British Transport police have advised travellers to expect queues on their journey home from the centre of London.