"́National Populism and the Press" Conference, Organised in Spain Proves to be a Resounding Success 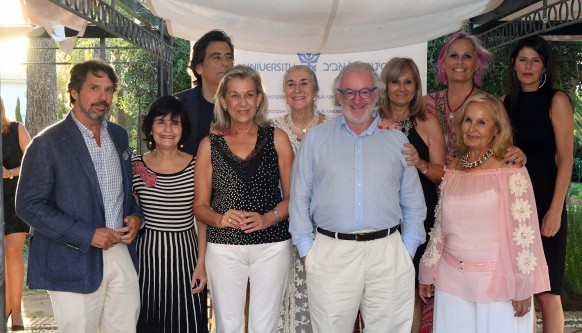 "́National Populism and the Press" Conference, Organised in Spain Proves to be a Resounding Success Source: Joaquin Dueñas Prensa


The coming together of renowned journalists and writers Arcadi Espada and Teodoro León Gross took place in Marbella, where they debated the present day challenges presented by national populism.

Marbella, 1st of July: two nights ago a conference on  ́National Populism and the Press ́ was celebrated, organised the Association of Friends of Tel Aviv University in Spain, marking the start of their 2017 lecture series. The conference was led by distinguished journalists and writers Arcadi Espada and Teodoro León Gross. Both reflected on what is considered to be the most pertinent subject in the world at the moment, especially in the European Union.

Both intellectuals debated the results of Brexit, the victory of Trump, Marie Le Pen coming second in the French presidential elections, and the polarisation of politics in Europe, with the resurgence of extreme right movements in countries such as Holland and Greece, all whilst we see extreme left groups consolidating. For the speakers, this affirms that populism is neither a question of rights and lefts nor a question of territory; rather it is a global issue that has arisen as a result of the collapse of the state of well-being.

What ́s more, during the course of the evening, enjoyed at the home of hostess Remedios Del Río, vice president of the Association of Friends of Tel Aviv University in Spain, the importance of the press was as an essential ally in supporting nationalism and populism was greatly emphasised. These two ideals depend on one another to succeed in the post-truth era ruled by media, in which emotions and beliefs take precedence over objective facts, in public opinion

Drawing to a close, the conference finally came to an end with an informal dinner during which, naturally, guests continued to discuss the different ideas put across during the talks and especially, in relation to the consequences of expansion and consolidation of National Populism for the West.

About the Association of Friends of Tel Aviv University in Spain

The Association of Friends of Tel Aviv University in Spain is a non-profit organisation that aims to extend the reach of this prestigious learning establishment, and the academic and institutional world of Spain.

With aims to promote cultural interchange, the Association of Friends of Tel Aviv University in Spain organises different activities such as that celebrated last night which forms part of their 2017 lecture series in which points of interest and current affairs are debated at the hands of renowned experts in each of their respected fields. The next meeting will take place in Madrid on the 14th of September. The conference, titled, ́The Role of Intercultural Communication in International Diplomacy ́, will be led by Professor Yoav Tenembaun, a teacher who is part of the Diplomacy Program of Tel Aviv University, and supported by ex-minister of Foreign Affairs, Miguel Ángel Moratinos.