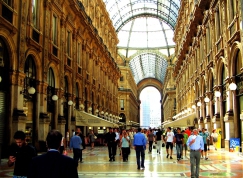 The Mediolanum Forum will welcome the global music event of the year next October.

You might have been too excited about Slash's performance closing the 2014 MTV EMA to notice that host Nicki Minaj signed off with a major reveal: "See you next year in Milan!" And no, that wasn't just one of Nicki’' many jokes—it's official! The 2015 MTV EMA will be held in Milan, Italy, at the Mediolanum Forum.

This will be the first time since 2004's Rome show that Italy has played host to the EMA… and the first time since 1998 that we've touched down in Milan! With Milan being the host of Expo 2015—a year of international events that kicks off in May and culminates with the EMA—the show promises to be extra exciting.