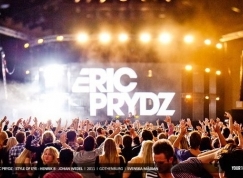 The show which featured artists ERIC PRYDZ, STYLE OF EYE, HENRIK B, and JOHAN WEDEL was Marbella's Promoters largest show this year. With thousands of watts of Soundsytem, 100m2 LED, and an incredible entertainment production package!

Karl, originally from Stockholm declared to be exhausted after a hard couple of months work, but "I was very happy with the show and the production. I want to thank the artists for their professionalism, and all the people in Gothenburg who attended, I can't wait to work with you again, you guys really rock!"

Sam Cameron, originally from Marbella, who joined the show straight no sleep from their show in Dreamers Marbella the night before mentioned "I couldn't have asked for a better Xmas gift than a show like this! Definitely the most special & complex show Ive been to for a medium size venue! We had production to feed thousands of people, the quality was immense! I also want to thank the artists, our friends who travelled from outside Gothenburg to support us, and of course a special thank to the whole of Gothenburg for making this happen, we will be back!

Both advanced they are working on their Marbella Summer plans, but want to hit Sweden & UK around March/April too! If you want to keep updated with their 2012 plans join them on Facebook & Twitter!