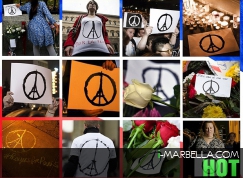 In the worst attack, a Paris city hall official said four gunmen systematically slaughtered at least 87 young people at a rock concert at the Bataclan concert hall before anti-terrorist commandos launched an assault on the building. Dozens of survivors were rescued, and bodies were still being recovered on Saturday morning.

Some 40 more people were killed in five other attacks in the Paris region, the official said, including an apparent double suicide bombing outside the Stade de France national stadium, where Hollande and the German foreign minister were watching a friendly soccer international.

It was the worst such attack in Europe since the Madrid train bombings of 2004, in which 191 died.

Celebrities around the world have expressed their support for Paris in the social media, among them David Beckam, Victoria Beckham, Jennifer Lopez, Eva Longoria, Chirstiano Ronaldo, and many others.

We at i-Marbella.com convey our sincerest condolences to the families and friends of everyone involved, and the whole Parisian and French community.