Global Gift Foundation and Prince William Together in London 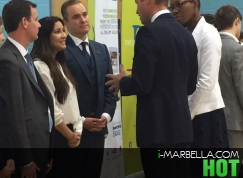 Maria Bravo met with the Duke of Cambridge at an anti-bullying event for Diana Awards.

Maria Bravo and the Duke of Cambridge attended a workshop on bullying prevention at the Hammersmith Academy in the British capital. Prince William showed keen interest in participating in the VII Global Gift Gala in London in 2016.

The Diana Award is one of the three beneficiary foundations along with The Eva Longoria Foundation and The Global Gift Foundation for the upcoming Global Gift Gala on November 30, 2015, in London.

In 2014, The Global Gift Foundation recognised the work of the foundation with young people by granting the Excellence Award.

The Duke of Cambridge personally congratulated Maria Bravo for the work of the Global Gift Foundation and expressed his intention to support the charitable initiatives confirming his desire to participate in the upcoming Global Gift Gala in London in 2016.

"The Prince has shown much interest in our foundation, our activities, and our social commitment worldwide. It is an honour to have his support and to count on the presence of a representative of the Family at the Sixth Global Gift Gala in London next 2016", María Bravo stated.