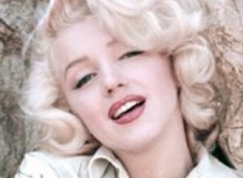 
Bobby Kennedy ordered Marilyn Monroe's murder by lethal injection to prevent her from revealing her torrid affairs with RFK and JFK: a new book sensationally claims to have finally solved the mystery surrounding her death.

Investigative journalists Jay Margolis and Richard Buskin believe they they lay to rest any notion that Marilyn committed suicide and reveal how they think the screen goddess really died.

The Kennedy brothers were "passing her around like a football" revealed brother-in-law, actor Peter Lawford, years after she died.

Marilyn knew too much about the Kennedys and threatened to reveal everything.

Bobby Kennedy did not act alone, the authors claim. Complicit in the murder was Lawford and Marilyn's shrink, who gave her the fatal dose of pentobarbitol.

Before that, she was given an enema filled with broken-down nembutals and seventeen chloral hydrates.

When ambulance drivers found her in her Brentwood guest house, "She was naked. She had no sheet, no blanket. There was no water glass. No alcohol…"