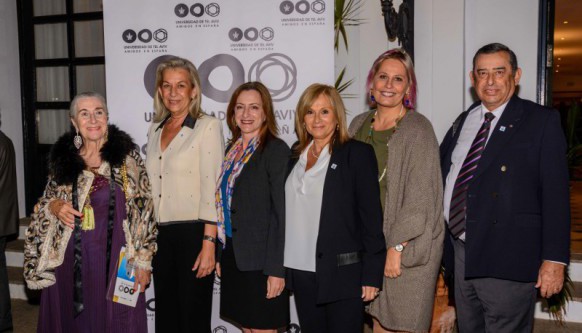 A moment from the Professor Karen B. Avraham's intervention - 2017

During the event, Professor Karen B. Avraham, Vice Dean of the Sackler Faculty of Medicine, revealed the main research that her faculty is working on at the moment and highlighted the benefits that their work brings to patients.

The event was taken by Francisca Caracuel, Deputy Mayor and Town Planning Councillor in Marbella, as well as third Vice President of the Province of Malaga and Rafael Cohen, Honorary Consul of Israel in Andalusia, who shared insights about education in Spain and Israel with the Vice Dean.

More than 60 people attended this great event where renowned scientist emphasized the impact of the discoveries being carried at Tel Aviv University at the moment.

One of the most relevant news was the found of cures for fatal illnesses such as cancer or Alzheimer’s.

“The use of new generation genomic sequencing has reduced the period from six months to 24 hours and the cost, from thousands of dollars to 500; With this technique the geneticists have determined that there are at least 57 illnesses for which they can save lives if they meet with anticipation the existence of a mutation in the gene involved” Stated Professor Avraham.

Professor Avraham also explained how these are currently working and saving lives of children between 10 and 18 years old, who participate in a clinical trial about the mutations that cause colon cancer.

Just later, Patricia Nahmad, Co-President of TAUSF praised Tel Aviv University for their excellent work regarding its researchers and students and the exchange of knowledge between this university and Spanish universities reflecting and amplifying the work of the researchers.

This educational event also took all the profits in a scholarship fund dedicated to Spanish students so that they can excel in their careers and research at the Tel Aviv University.