Cervantes May Have Been Found… 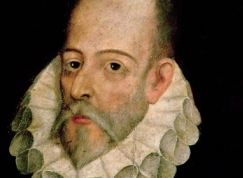 Researchers have cautiously confirmed that they believe they have located the remains of Spanish author Miguel de Cervantes in the crypt of a Madrid convent almost 400 years after his death.

A team of scientists said that after a year-long quest they could report that they discovery of what they believed were "some fragments" of the author of Don Quixote who died in 1616 and was buried according to his wishes at the Convent of the Barefoot Trinitarians in Madrid.

But that a lack of DNA made it impossible to say definitively.

"It is possible to say after analysing all the information that it is considered that amid the fragments of those discovered in the crypt of the church of the Trinitarians there are some fragments belonging to Miguel de Cervantes," said forensic anthropologist Francisco Etxeberria.

Speaking at a press conference on Tuesday morning at Madrid's City Hall, the head of the scientific team was at pains to point out, however, that there was no scientific proof of the find at this stage.

He said the conclusion had been arrived at "in view of all the information generated in the case of character historical, archaeological, and anthropological. There are many coincidences but no discrepancies."