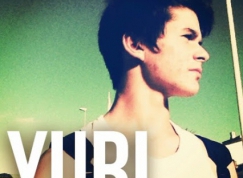 
Yuri Ruh dos Santos, "Magic feet" an extremely talented left winger, is the first player from Marbella, Spain, to make a professional, international transfer at the age of 17.

Yuri Ruh dos Santos, an extremely talented left winger from Marbella FC, also known as "Magic Feet", is the first young player under 18 from Marbella, Spain, to make an international transfer after having been offered a professional football contract by a UEFA and FIFA, European first division club, AS Trenčín, an affiliate club of Ajax, Netherlands. The international transfer takes place at the end of May and Yuri plays his first international match with them in Amsterdam at the Copa de Amsterdam, on the weekend of the 23-25 May, 2015.

Yuri, of dual nationality, Canadian and Portuguese, was born February 7th, 1998, in Montreal, Canada, and moved to Spain at the age of one. He has been living with his mother Kathya in Marbella ever since. At the tender age of 6, he started to play football in La Campana, Nueva Andalucia. It became apparent very quickly that there was a football star in the making. Yuri was a natural.

In February 2013, West Bromwich FC and Stokes City FC in England invited Yuri over for trials. They were very impressed by his game, saying: "He's amazingly fast, agile, and the precision of his crosses is unprecedented." Unfortunately Yuri was a little too young, barely 15, to go live alone without family in England. So, they decided to wait another year.

The following December, Yuri was scouted by Santana, then the coach of the team in Fuengirola, Los Boliches, División de Cadete Autonómico. Santana was looking for a strong left winger to help the team that was at this point in the season at risk of being downgraded to a lower category. He saw Yuri playing at Los Compadres in Marbella and decided that Yuri was the player who would save the team from losing their position in the División de Cadete Autonómico. He approached the player and his mother to explain the situation. It was an opportunity for Yuri to move up to a higher level, the top level of his age group in Spain, so they accepted the transfer. Santana was right. Once Yuri joined the team, there was no stopping him and the team started winning again. At the end of the season, the club was saved from a downgrade, and the team retained their place in the División de Cadete Autonómico.

In June 2014, Getafe CF, a first division club in Madrid, Spain, invited Yuri for trials. There, in spite of his young age, 16, Yuri played with the under 19, "División de Honor", and performed fantastically. He played an international game against a Japanese team where he scored 2 goals and did 1 assist. "It was a great experience," says Yuri.

However, Yuri was offered a position at Marbella FC in the División Nacional Juvenil and he decided to go for it, considering that the club was right at home. This year the team is ascending to "División de Honor", which is a great victory.

In the summer of 2014, just before the beginning of the season, the Ajax affiliate Club AS Trenčín, invited Yuri for trials. They fell in love with him. "He's a typical Spanish player, gliding on the field and making it look so easy with his Tiki Taka style," said one of the Dutch coaches, Gideon Van Der Wee. They knew they wanted him; but Yuri still wasn't ready to move away from Marbella, which he calls home. He spent the season at Marbella FC, and the Dutch kept a good eye on him throughout the season.

This time, the Dutch decided to make him an offer he couldn’t refuse. Yuri was offered his first professional footballer's contract to go play for a UEFA and FIFA European first division club and Yuri accepted. "I just want to play football," says Yuri with a big smile, "...and that's the opportunity they are offering me; to make a living doing what I love more than anything."

We asked Yuri: "Who was your best coach?" "Igor Jovicevic from La Campana, Antonio Galán from San Pedro Atlético, and Santana from Feungirola, Los Boliches," he replied. "They believed in me, pushed me forward, taught me a lot, and it has been an honour to train with them."

When asked if he was going to find it difficult to be away from home, Yuri answered: "Of course, I'm going to miss my hometown, all of my friends that I grew up with, especially my best friends, Tony Drouhin and Nico Sempere Pedrero, my big brother, and my mothe,r who are always there for me no matter what; but I have a dream and I'm pursuing it." He pauses a few seconds and says: "I just have one message for all of you out there who have a dream. No matter how hard it gets, no matter how many times people tell you to stop dreaming. Don't! Dreams do come true if you stay focused, believe in them, believe in yourself, and are ready to work hard and give it
your all to achieve them."

All eyes are on this young talented left winger, Yuri – "Magic Feet" – and the world is watching as he makes his debut as a professional player. The "Marbellís" are very proud of him and support him all the way. "Yuri – "Magic feet" – is our little star, we have watched him grow into a fantastic player, and he brings hope to the young aspiring footballers of our community," says a parent from La Campana, whose son once played on the same team with Yuri.