Anything is possible, 45th president of United States of America, Donald and Melania Trump 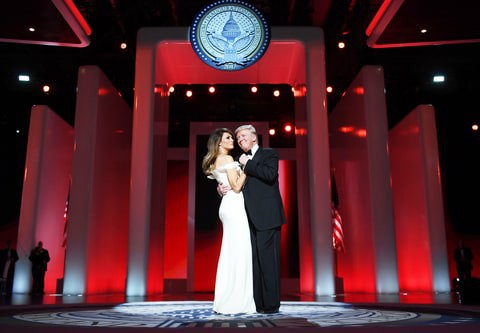 
Melania and Donald Trump, the people have chosen their first lady and 45th president of USA

Donald John Trump (born June 14, 1946) is an American businessman, television personality, politician, and the 45th President of the United States.

During his presidential campaign we have witnessed the surreal media campaign against Donald Trump. Almost every celebrity was publicly against the today's president. Nevertheless, the people had their voice heard. Even trough many voted against, rather than for, most just wanted to avoid having another Clinton in the White house.

Everything is possible, anyone can become their dream. This is the message that unconditionally is transmitted by Trump's victory. Yet mass media failed to aknowledge it. He was represented by mass media in harsh and devastating way, where his work and family were dragged in most disrespectful way.

Trump danced trough every obstacle with the smile and celebrating his victory with most simple lyrics from Frank Sinatra's song: My way. Simple and elegant. It was the first time a president invited his family to join him during the first dance. I found that beautiful and emotional. Here is the story of the great Donald Trump. Buckle up!

Born and raised in Queens, New York City, Trump received an economics degree from the Wharton School of the University of Pennsylvania in 1968.

In 1971, he took charge of his family's real estate and construction firm, Elizabeth Trump & Son, which was later renamed The Trump Organization. During his business career, Trump has built, renovated, and managed numerous office towers, hotels, casinos, and golf courses.

He owned the Miss USA and Miss Universe pageants from 1996 to 2015, and has lent the use of his name in the branding of various products. From 2004 to 2015, he hosted The Apprentice, a reality television series on NBC. As of 2016, Forbes listed him as the 324th wealthiest person in the world (113th in the United States), with a net worth of $4.5 billion.

Trump sought the Reform Party's presidential nomination in 2000, but withdrew before voting began. He considered running as a Republican for the 2012 election, but ultimately decided against it. In June 2015, he announced his candidacy for the 2016 election, and quickly emerged as the front-runner among 17 contenders in the Republican primaries. His final opponents suspended their campaigns in May 2016, and in July he was formally nominated at the Republican Convention along with Mike Pence as his running mate. His campaign received unprecedented media coverage and international attention. Many of his statements in interviews, on social media, and at campaign rallies were controversial or false.

Trump won the general election on November 8, 2016, against Democratic rival Hillary Clinton, and assumed office on January 20, 2017. At age 70, he is the oldest and wealthiest person to assume the presidency, the first without prior military or governmental service, and the fifth elected with less than a plurality of the national popular vote.

Trump's platform emphasised renegotiating U.S.–China relations and free trade agreements such as NAFTA and the Trans-Pacific Partnership. His positions have been described by scholars and commentators as populist, protectionist, and nationalist.

The six bankruptcies were the result of over-leveraged hotel and casino businesses in Atlantic City and New York: Trump Taj Mahal (1991), Trump Plaza Hotel and Casino (1992), Plaza Hotel (1992), Trump Castle Hotel and Casino (1992), Trump Hotels and Casino Resorts (2004), and Trump Entertainment Resorts (2009). Trump said, "I've used the laws of this country to pare debt ... We'll have the company. We'll throw it into a chapter. We'll negotiate with the banks. We'll make a fantastic deal. You know, it's like on The Apprentice. It's not personal. It's just business."

A 2016 analysis of Trump's business career by The Economist concluded that his "... performance [from 1985 to 2016] has been mediocre compared with the stock market and property in New York", noting both his successes and bankruptcies. A subsequent analysis by The Washington Post concluded that "Trump is a mix of braggadocio, business failures, and real success."

Trump has five children by three marriages, and has eight grandchildren. His first two marriages ended in divorces that were publicised in the tabloid media.

Trump has been nicknamed "The Donald" since Ivana referred to him as such in a 1989 Spy magazine cover story. By early 1990, Trump's troubled marriage to Ivana and affair with actress Marla Maples had been reported in the tabloid press. Ivana Trump was granted an uncontested divorce in 1990, on the grounds that Trump's treatment of her, such as his affair with Maples, had been "cruel and inhuman". In 1992, he successfully sued Ivana for violating a gag clause in their divorce agreement by disclosing facts about him in her book. In 2015, Ivana said that she and Donald "are the best of friends".

Maples gave birth to their daughter Tiffany, named after Tiffany & Company (Trump's purchase of the air rights above the store in the 1980s allowed him to build Trump Tower on Fifth Avenue), on October 13, 1993. They married two months later on December 20, 1993. The couple formally separated in May 1997, with their divorce finalised in June 1999. Maples raised Tiffany as a single mother in Calabasas, California, where they lived until Tiffany's graduation from Viewpoint School.

In 1998, Trump began a relationship with Slovene model Melania Knauss, who became his third wife. They were engaged in April 2004 and were married on January 22, 2005, at Bethesda-by-the-Sea Episcopal Church, on the island of Palm Beach, Florida, followed by a reception at Trump's Mar-a-Lago estate.

On March 20, 2006, she gave birth to their son, whom they named Barron Trump. Having heard the language since his birth, Barron is fluent in Slovene. In a February 2009 interview on ABC's news program Nightline, Trump commented that his love for his business had made it difficult for his first two wives to compete with his affection for work.

I hope we will all witness America becoming great again and I wish all the luck to the new president. Given that he is an incredible businessman I certainly trust that USA will find better incomes than new wars, as it was the case till now.