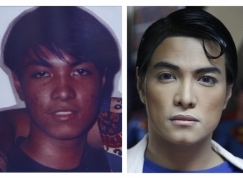 
Not even kryptonite could keep Herbert Chavez, 35, from pursuing his dream to look like Superman.

News service Bandila recently profiled Chavez, who lives in the Philippines and has been going under the knife since 1995. He now has a cleft chin, a thinner nose (to mimic actor Christopher Reeves’ nose), fatter lips (from silicone injections) and thigh implants.  Based on the before and after pictures, there appear to have been other surgeries as well.

His apartment is decorated with memorabilia featuring the Man of Steel, including pillows, photos and life-sized statues. RealSelf.com, a website offering consumer reviews and expert Q&A about cosmetic procedures, translated many of the story’s details, including that Chavez is a “pageant trainer.”

Given the frequency of Chavez’s surgeries, it’s not surprising that one psychologist in Bandila’s report said he might have body dysmorphic disorder, defined by the Mayo Clinic as a chronic mental illness “in which you can’t stop thinking about a flaw with your appearance.”

Hulk Hogan Has Back Surgery

Barbie vs. real women: the war rages on