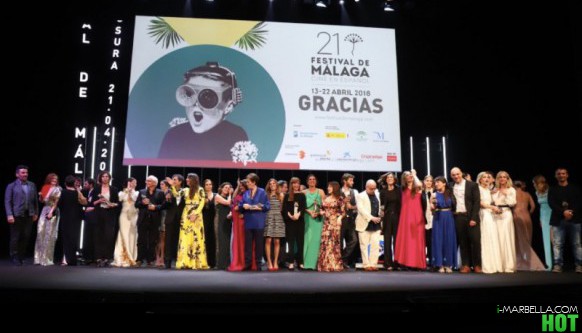 
One of the biggest events in Malaga took place during the days of the 13th to 22nd of April, 2018. The Malaga Film Festival of Spanish Cinema (FMCE) an annual film show held in Malaga, Spain.

The 8-day film festival celebrated the best of Spanish cinema and provided a feast of films, some of the best on screen, as well as a lot of cinema-related activities. This year was the 21st anniversary of Malaga Film Festival, an event in the city that drew crowds in their thousands.

The festival projects the most important releases of the year of Spanish cinema, including documentaries and short films. It also awards prizes to the best films of the year as well as honorary awards. The main award is the Golden Biznaga for Best Film. Other winners, such as the Critics Award or Best Direction, receive Silver Biznagas. The festival also hosts roundtables and colloquiums on current issues for Spanish cinema.

The top prize at the Malaga Film Festival is the ‘Biznaga de Oro‘ (typical flower made of gold jasmine flowers) for the best film. There are also several silver Biznaga prizes for best actor, actress, director, supporting actor/actress, music…

The Winners with the Best Prizes

From the top prizes we have:

One of Spain’s most successful singer-songwriters Alejandro Sanz premiers a documentary about his life, ‘Sanz: lo que fui es lo que soy’ (What I was is what I am). The organizers have, however, confirmed that the Spanish artist with the most Grammys (23 in total) won’t be in Malaga for the premier.

As expected people believe that films are only in Spanish. However. Not all of them, but because the Malaga Film Festival celebrates cinema in the Spanish language, most of the films are in Spanish. Those that are original version (VOSE) say so on their details in the programme.

The famous Latin-American filmmaker winner of a Golden Globe for Best Director for his dark fantasy film The Shape of Water was the top awarded during the 21st Film Festival with the Malaga - SUR Prize reaffirming that with ''“el cine fantástico se puede hacer poesía” (fantastic cinema can be made poetry). The director has highlighted his "foundational relationship" with Spanish cinema. "Here in Spain I regained my faith in life and in the cinema," explained the director who placed two of the films made in Spain, El espinazo del diablo and El laberinto del fauno, among his three favorites; a list that opens with its latest creation, the Oscar-winning La forma del agua.

The Malaga Festival ended on Saturday with its closing day. After several intense days in which, in addition to watching movies, series, films and many awards, we have seen in the Andalusian city dozens of "looks" that will remain for the memory or that it is preferable that we erase from our memory

The film "Las Distancia", by Elena Trapé, has won the Golden Biznaga for the best Spanish feature film at the 21st Spanish Film Festival in Malaga, while the Brazilian-Uruguayan co-production "Benzinho", by Gustavo Pizzi, has won La Biznaga de Oro for the best Ibero-American feature film.

"I love coming back to Malaga, it's been many years since I came here because I always got caught working," she said. Paula Echevarría monopolized all the flashes upon her arrival at the red carpet of the Cervantes theater in Malaga, where the closing gala of the Spanish Film Festival was held.

Javier Rey has managed to cheer the audience at the gala with his speech to win the Silver Biznaga for Best Actor for 'Sin Fin'.

The actress Bárbara Lennie has been awarded this Thursday with the Premio Belleza Comprometida 2018 awarded by L'Oréal Professionnel within the framework of the 21 Festival de Málaga. Cinema in Spanish. The award is given to artists dedicated to supporting the cause of HIV.

Even though The #21FestivalMálaga has ended, some activities continued in The Solidarity Space throughout the weekend.

On Saturday morning there was a space the urban art of Aintzane Cruzeta and The Bohemian Real in the Plaza de la Merced(More pictures in the gallery below).

How can you participate?

The Festival requirements are only for movies made after January 1, 2017. The duration of the short films may not exceed 30 minutes and only a maximum of two per director will be admitted to the competition. All the films participating in the different sections of the Festival will be presented in the original version and those whose original language is not Spanish, with subtitles in this language