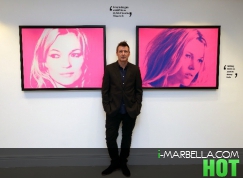 
If you joined on the January 16th red carpet launch party for '40' - a Kate Moss Retrospective in partnership with Beautiful Crime we hope you had as much fun as we did! If you weren't able to make it, we're sorry, luckily here are the highlights from our star-studded event!

Kate Moss's sultry stares from ten stunning screen prints by Russell Marshall in ten neon colour ways that reflect the printing style and influence of Marshall's years as a journalist. This was accompanied by classic Moss quotes, such as 'nothing tastes as good as skinny feels' and a biography by Amy Watts.

What we listened to:

Moss was once quoted saying that she wanted to be a rock star, touring on a bus with her band. The music reflected this, with 90s rock, The White Stripes, Oasis, and a Primal Scream track that features Kate herself: 'Some Velvet Morning'.

One canvas, donated from the exhibition for the annual President's Club Charity Dinner, raised £50,000 in the charity auction! This image has now sold out in all colour ways and raised a staggering total of £74,000 for charity, as the test print was also auctioned at the Global Gift Gala in November.

Do pop into the gallery to see the exhibition, which is up until February 15th, we look forward to seeing you!

As always, we'd love to hear your thoughts on this series, and if you have any queries, please don't hesitate to get in touch!