LA FAMILIA presents 'FUMBLE IN THE JUNGLE' Costume party of the year...Best take Monday off!! 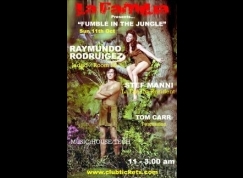 
LA FAMILIA presents 'FUMBLE IN THE JUNGLE' Costume party of the year...Best take Monday off!!

Costume party of the year...Best take Monday off!!

After the success of our last Costume party 'PLAYBOY MANSION 1973' We have raised the bar for our next themed event!!

Having chartered an airbus from Lima in Peru, the ' La Familia crew' were airborn and on their way to their sunny retreat in Buenos Aires.

All was well, until suddenly the engine started to splutter and smoke filled the cabin. Everyone was clinging on for their lives as the airbus started to spiral out of control and descend at a rapid rate ( a bit like this story...)

Within minutes the plane had crashed and the La Familia crew (who had already started eating each other) discovered they were on a magical Island!

In the distance they could just about hear the sound of a beating drum coming from the deepest, darkest, depths of the Jungle. They decided to go and explore.....

Raymond Isaacs aka Raymundo Rodriguez has been making serious waves since he burst onto London’s underground house music scene at the end of the 90s. He 1st started drawing attention after gaining residency at one of south London’s only pure House music venues, The Buddha lounge. It was here that he began to hone his craft, often playing extended sets 2 or 3 times a week. It wasn’t long before he started receiving invitations to spin at the more major clubs in London, the Ministry of Sound, Hanover Grande and The Cross. In no time at all he was snapped up by Italian party promoters Vertigo, where he held a 2 year residency, other residents included Dave Picioni, Claudio Basile and Dj Cosmo. Whilst at Vertigo he held his own alongside many industry giants including Ted Patterson, Satoshi Tomie, Rocky, DJ Ralf, Ricky Montinari, Alex Neri and Smokin Jo. Danny Rampling would often be seen hanging out there and quickly became a fan, even going as far as to name Ray as one of the future heroes of house, which was printed in the 2002 DJ Mag top 100 poll, and Ray is mentioned again in 2003 top 100 by world famous DJ producer Tim Deluxe who claimed Ray was one of the best undiscovered dj's in the scene.
...read more...

Early bird tickets are £15 and are LIMITED please buy asap. Tickets are £20 Thereafter.

Please make as much effort as poss, when u see the decor of the venue u will see why!!