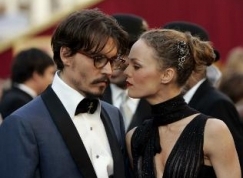 
MOVIE star Johnny Depp and his partner, French supermodel Vanessa Paradis may look like a gorgeous couple on the outside, but they aren't as clean as they sometimes appear, Fox 411 reported.

"Johnny usually smells because he rarely showers,” a source said.

“He isn't big on personal cleanliness and Vanessa isn't much different.  They found their perfect match in each other - it's hard to be around them.  Their personal hygiene is not their priority.”

And while Johnny is known as a movie hunk and was even named People magazine’s Sexiest Man Alive last year, sources say he takes pains to cultivate a different image in his personal life.

As for his gorgeous girlfriend, sources told Fox 411 she is just like her man.

“Vanessa is the furthest thing from a supermodel every second that she isn't on a big photo shoot.  No makeup and unruly hair - she's a bit of a mess normally," an insider said.

Johnny's new co-star, Angelina Jolie, will certainly get a taste of the real man while they film The Tourist together in Paris this month.

"When Johnny shows up for work or travel, he's usually in rough shape,” a source said.

“If he's showing up for work on set, he'll be a total professional, but that doesn't mean he'll be shiny and clean.  He entrusts his movie looks to his hair, make-up and costume team.  He's quite a character in person."