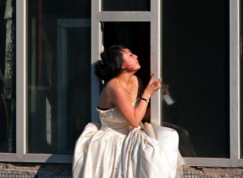 A 22-year-old woman in a wedding gown is grabbed by Guo Zhongfan, a local community officer, as she attempts to kill herself by jumping out of a seven-story residential building in Changchun, Jilin province, China on May 17. According to local media, the woman tried to commit suicide after her boyfriend of four years broke up with her, just as they were making plans to get married. The woman did not sustain any injuries during the incident.

Dressed in her wedding gown, a college student identified only as Miss Li climbed out on the window ledge of the building in Changchun city in northeast China.According to local TV, the 22-year-old sobbed and swung her legs out the window for about an hour before police officers arrived. Li said she could not live with the fact her fiancé had left her and married another woman just days before their wedding, local TV said.

Reuters reported that the woman lived on the fourth floor of the building but made her way to another apartment upstairs. As dozens of people looked on, authorities arrivd at the seventh-floor dwelling determined to prevent Li from taking her own life. Television footage showed a local official named Guo Zhongfan holding Li by her neck and arms as she dangled above the street.

Changchun Television said she pushed herself off the ledge before she was grabbed by Guo. A man in the apartment below assisted in the rescue by reaching out the window and pushing Li’s feet up. The crowd gathered below applauded Guo after the woman was pulled back inside. "I did what anyone would have done," Guo told reporters. Li was later taken to hospital.

Natasha Romanov's Big Birthday Party "I Do" Part I