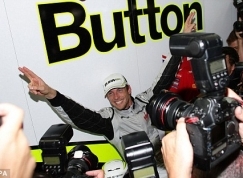 Jenson Button proudly claims the world title for the first time after roaring to victory in the Brazilian Grand Prix. Australia’s Mark Webber was the race’s comfortable winner, but Button’s fifth place finish was enough to secure his maiden world championship.

This is the second consecutive year that a Brit has been named world champion. Three-times world champion Jackie Stewart told Sky News: “I couldn’t be happier for Jenson… It’s been 40 years since there’s been a British champion back-to-back”.