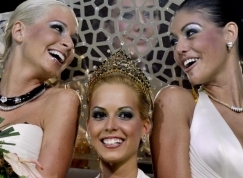 
Oct. 10th was a night for unnatural beauties in Budapest, as Miss Plastic Hungary 2009 was crowned. Contestants showed off breast implants, nose jobs and face lifts to promote the benefits of plastic surgery in countries where it's viewed skeptically.

"Hungarians used to laugh about plastic surgery but it's time for Hungarian women to care more about their appearance," said photographer Marton Szipal, one of the pageant judges.

Plastic surgeon Dr. Tamas Rozsos said the pageant also meant to show that cosmetic corrections did not necessarily have to be about oversized breasts, bulbous lips and skin stretched to near tearing point.
"This about restoring harmony ... eliminating asymmetries and giving women the opportunity to have normal features," Rozsos said. "Plastic surgery has a bad reputation in Hungary but its mostly due to the exaggerations."

To qualify for the pageant, the 18 Hungarian residents had to prove they'd gone fully under the knife — mere Botox or collagen injections did not count. Nearly all the contestants showed off augmented breasts, with reshaped noses also popular. One finalist had surgically adjusted toes.

VIDEO: See What Alcohol and Drugs Have Done to Lindsay's Face! (2)

Dr. Kai O. Kaye announces the completion of the extension of its surgical-medical unit