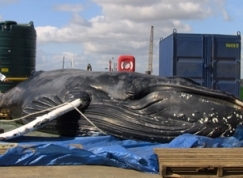 The whale was a male juvenile and measured 28 feet (9 metres). It was the first whale of its kind to be found in the river. The first and only reported sighting of the whale was on Thursday when it was spotted in the same river, between the London districts of Northfleet and Tilbury.

A humpback whale has been found dead in the River Thames in London, England.

Scientific experts suspected that the creature may have been a bottlenose whale at the time. There were no subsequent sightings of the whale until Saturday morning, when the humpback whale's carcass was found near Dartford Bridge. After being moved to Denton Wharf at Gravesend in Kent, a postmortem examination by the Zoological Society of London revealed that he had died of starvation, and was estimated to be about two years old. The tests are currently still ongoing.

Rob Deaville, a zoologist at the society said: "Once [whales] get into the river system it is very difficult for them to get out again. Further tests are still pending and may provide additional information about what happened to this whale." Rob is the project's manager. He also commented: "Preliminary results from the post-mortem examination indicate that it may have died as a result of starvation. There have only been 12 strandings of humpback whales in the last 20 years and this is an incredibly unusual event."

"Although it's obviously a sad outcome in this instance, the post-mortem examination has given us a rare opportunity to examine a truly extraordinary animal at close quarters. Information gathered through examinations like these will hopefully help further our understanding of such animals and also help contribute to improving their conservation status."