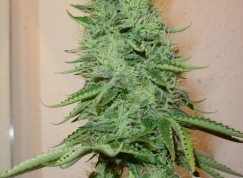 
A 19 year old woman has recently been arrested on suspicion of growing marijuana and unlawfully appropriating energy.

Warrenhurst Road residents in Lancashire, UK were mystified recently as to why the public lighting on their street was so much softer than on other roads in the area, so much so that they inquired if the council was testing new greener, low-energy bulbs.

It was only when local police on the beat observed that the area was much darker than other roads that an inquiry was initiated.  The riddle was solved when police discovered a 19 year old woman growing marijuana in her house using a sophisticated hydroponics system.  The woman was using so much power from the lighting that the street light bulbs were barely flickering.  The police raid of the house uncovered a staggering £100,000 of cannabis growing in all three bedrooms of her home.

Cocaine and Marijuana found in several raids across Spain

Applying for an NIE number in Spain (5)