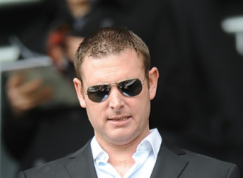 Dubliner Darragh MacAnthony, who owns Peterborough Football Club, which has just won promotion to the Championship, set up MacAnthony Realty International (MRI) in Marbella as the Millennium began. Hugely popular on the British market, MRI boasted a £100 million annual turnover before the credit crunch. As well as property development in Spain, MRI marketed villas and apartments in Morocco, Bulgaria and Cape Verde, where the company also arranged furniture supplies.

But now MacAnthony, 35, and his former joint chief executives, Michael Liggan and Dominic Pickering, have been accused of ‘theft by swindle and misappropriation of funds’ in a claim filed in Madrid by 60 British and Irish claimants who say they lost more than half a million pounds in undelivered furniture five years ago. Lawyer Antonio Flores of Marbella- based property solicitors Lawbird, accused MacAnthony of failing in an obligation to file for insolvency for his Spanish companies.

MacAnthony and his former chief executives have consistently denied any wrongdoing. In relation to the forthcoming claim, MacAnthony, speaking from the US, said: ‘There are no foundations behind these allegations. I certainly didn’t do anything wrong and neither did anyone with MRI when I was there.’  The allegations made in Spain follow what Northern Ireland MP Sammy Wilson described in the House of Commons last year as a property fraud where MRI, or related companies such as MRI Overseas Property, acted as the developer.  The company used programmes on the Property TV Channel hosted by MacAnthony’s younger sister, Wendy, to market holiday homes.

In 2008, as a result of complaints against MRI, a tribunal held by the National Federation of Property Professionals said it was ‘appalled to hear of the company’s misleading business practices’. It issued fines of £5,000 and MacAnthony resigned his membership of the Federation.  Prompted by complaints from British customers, the Serious Fraud Office looked into MRI but took no action. However, it sent alleged victims a letter which said that although it did not intend to prosecute anyone, this did not mean that an offence had not been committed elsewhere. The Costa del Sol property empire has all but vanished. An investigation traced MRI companies to an empty office in Madrid.

Documents show that last October MacAnthony and Pickering, as directors, handed MRI Overseas Property Group to a Peruvian company, under the directorship of octogenarian Fernando Arespacochaga, which appears to have never traded. John and Muriel Andrews from Ballycarry, Co Antrim, paid £26,000 for a furniture pack in 2006, but Mr Andrews said: ‘We as yet have received no furniture, no offer of a refund, no apology.’