Halloween: A Celebration of the Dark 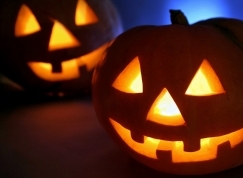 
Halloween is an annual holiday celebrated on October 31. In the United States, it is second only to Christmas in popularity and in money spent on decorations. Also in Europe, Halloween is gaining more and more popularity over the years.

Halloween originated with the ancient Celtic celebration of Samhain which occurred on October 31. This celebration goes back more than 2000 years. It marked the beginning of the cold and barren part of the year and was associated with death and the spirits of the dead. The dead were believed to walk the earth on this night so bonfires were lit and animal skins donned for protection. The Catholic church later co-opted this religious event and renamed it All Hallows Eve since it was on the the eve of Allhallows Day (All Saints' Day).

The legend of Jack-o'-lantern
Jack-o'-lanterns are the ubiquitous Halloween symbol. They are made from hollowed out pumpkins with a face carved into them. Often the face is made to appear frightful. A candle is placed inside the lantern to illuminate it.
From Irish folklore comes the legend of the jack-o'-lantern. A drunkard named Jack stumbled home from a night of drinking at a local tavern. The Devil appeared and demanded that Jack come to Hell with him because of his evil ways. Jack convinced the Devil to climb a nearby tree to pick an apple. As the Devil climbed the tree, Jack carved a cross in the tree's trunk thereby preventing the Devil from coming back down. The Devil demanded that Jack release him. Jack said he would if the Devil promised to never admit him to Hell. The Devil agreed. When Jack died he was too sinful to be allowed into Heaven, but the Devil would not let him into Hell, so Jack carved out one of his turnips, put a candle inside it, and began endlessly wandering the Earth looking for a place where he could find eternal rest.

Fun game for Halloween
Bobbing for apples is a game often played on Halloween. It consists of putting apples in a container filled with water and then trying to grab them with one's mouth. The practice has been criticized as being unsanitary.