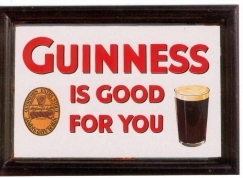 On September 24, 1759, Arthur Guinness signed a 9,000 year lease for the St James' Gate Brewery in Dublin, Ireland. 250 years later, Guinness has grown to a global business that turns over 10 billion euros (US$14.7 billion) every year.

Arthur's Day has been described by Irish Prime Minister Brian Cowen as "an excuse for having a great party." Pub-goers across Dublin — as well as cities around the world including Kuala Lumpur, Lagos, Cotonou, Hong Kong, and New York — raised their glasses in tribute to Arthur at exactly 17:59 p.m. to mark the year the drink was begun. Ireland has issued a stamp for the event.

St James' Gate Brewery had grown to become Ireland's biggest by 1833 and in 1886 had grown to the biggest in the world, producing 1.2 million barrels of black stout each year. Today, Guinness is enjoyed in 150 countries and 10 million pints are drunk every 24 hours — although Irish myth has it the brew tastes best in Dublin.