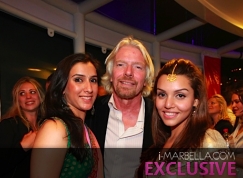 
The famous Fly Kingfisher Monaco GP took place for the 5th time already and has become the most elite party in Monaco over the years.

Hosted by Dr Vijay Mallya who is the owner of Force India F1 Team and Chairman of the biggest spirits company in the world- UB Group, on the amazing Indian Empress, which is one of the largest private yachts (95m) existing.

Theme of the party this year was Destination Bollywood - guests were greeted at Fly Kingfisher check in desks and welcomed to a journey through Indian delights including welcome bangles, bind his, deliciously luxurious Indian canapés and cocktails whilst enjoying entertainment by Bollywood artists.

Lewis Hamilton’s parents Linda and Anthony together with Princess Beatrice

Among the guests dancing the night away were a host of Formula One drivers and team principals, Virgin’s Sir Richard Branson, the stars of BBC television’s Top Gear series Richard Hammond and James May, CVC’s Donald McKenzie and Princess Beatrice of York.

At the night’s close, everyone agreed the ‘Destination Bollywood’ trip had been wonderful and set the scene perfectly for this season’s inaugural Indian race, which will take place in New Delhi in October. A night to remember!

Royalty and Celebrities at the Amber Lounge Fashion in Monaco