Gaddafi 'buried in secret at dawn' 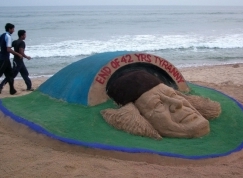 
Libyan officials said on Tuesday that the bodies of Muammar Gaddafi, his son Muatassim and a top aide had been buried at dawn in an unknown location in the desert. Witnesses reported that the bodies of the three men were removed overnight from the meat storage warehouse in Misrata where they had been on display.

A security guard at the warehouse confirmed the move to the Arabic television station al-Jazeera. An Associated Press Television News team said it saw three vehicles leave the warehouse area late on Monday, and when they entered the facility the bodies were no longer there. The question of how to dispose of Col Gaddafi's body has been a political minefield for the new Libyan leadership – which is why it had taken four days for a decision to be reached.

There were concerns that a public grave could become a shrine for Gaddafi loyalists or a target of hatred for those who opposed his regime. Meanwhile a committee to investigate the circumstances surrounding his death has been formed, after video footage showed him alive at the time of capture in Sirte on Thursday.  Officials said he had been killed subsequently in  crossfire.

Another atrocity came to light on Sunday when the bodies of 53 Gaddafi loyalists were found on the lawn of the abandoned Hotel Mahari in Sirte. Peter Bouckaert, emergencies director at Human Rights Watch (HRW), said in a statement: "Some had their hands bound behind their backs when they were shot." He said the the victims had died about a week ago. Libya's new rulers have denied any involvement in abuses and have urged Libyans to forego reprisal attacks. HRW, Amnesty International and other rights groups regularly document incidents of atrocities suspected of being carried out by pro- and anti-Gaddafi forces during the conflict.