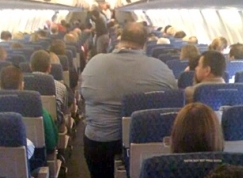 
An ongoing dispute has culminated in “fat charges” for overweight passengers

Air France has introduced a new policy on “taxing” overweight passengers that will take effect from 1st February.  If a passenger is judged to exceed an airline seat of 43 – 44cm then they will have to pay 75% of the cost of a second seat.

Monique Matze Air France spokesperson, stated: "People who arrive at the check-in desk and are deemed too large to fit into a single seat will be asked to pay for and use a second seat”.

This new ruling has been incited for ´safety reasons` so that all passengers can safely use seat belts and allows larger travellers to click one end of the seat belt into the plug of the adjacent belt.

Last year United Airlines also introduced the overweight charge as a direct response to over 700 objections from fellow travellers who were unable to enjoy their journey due to the neighbouring passenger encroaching on their space.

One third of 100.000 Ryan Air passengers were in favour of the “fat tax” and felt that it would be a feasible price slashing measure.