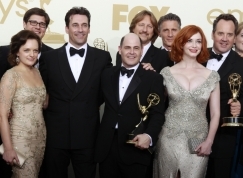 
Mad Men won its fourth consecutive Emmy and Modern Family claimed its second at the 63rd Primetime Emmy Awards on Sunday that aired live on Fox.

Julie Bowen also won her first Emmy for Modern Family, but viewers probably didn’t hear her speech because they were too busy staring at her very low-cut dress. Her win was immediately followed by a prize for her on-camera hubby (and first-time victor) Ty Burrell, who performed a well-received stand-up act instead of muttering a bunch of ho-hum thank-yous. Early in the show, the ABC comedy also dominated in the directing and writing categories, prompting Lynch to quip, “Welcome back to the Modern Family awards!”

Early in the show, Charlie Sheen took the stage to introduce the winner for best comedy actor, which he referred to as “his category.” “I want to take a moment to get something off my chest, to say a few words to everyone here from Two and a Half Men,” he began. “From the bottom of my heart, I wish you nothing but the best for this upcoming season. We spent eight wonderful years together and I know you will continue to make great television.” When winner Jim Parsons went up to collect his second Emmy in a row for his work on The Big Bang Theory – another show run by Two and a Half Men‘s producer Chuck Lorre — he said, “This is odd for so many reasons.”

One of the funniest moments of the telecast occurred in the best actress category, when all the nominees took the stage as if it were a beauty pageant. (The gag came courtesy of nominee Amy Poehler). The six women received a standing ovation before Melissa McCarthy was singled out for her work on the CBS sitcom Mike & Molly. She was then given a tiara and bouquet of roses, as well as plenty of hugs from her fellow actresses. “I’m from Plainville, Illinois and I’m standing here and it’s kind of amazing,” said a teary-eyed McCarthy.

Here’s what else was amazing: The multiple wins for Downton Abbey, a little known (but critically acclaimed) British series featuring Maggie Smith and Elizabeth McGovern that airs on PBS.  It took home four statues including best miniseries. “This is really a David and Goliath story,” said writer Julian Fellowes. ”It seems perfectly extraordinary that we’ve won.” The second season returns to PBS in January.

The ceremony opened with a skit featuring Lynch talking to “Mr. President of Television” Leonard Nimoy — a role that had originally been given to Alec Baldwin until his joke about NewsCorp chief Rupert Murdoch was left on the cutting room floor. The 30 Rock actor reportedly took a swipe at Murdoch and the much-publicized phone-hacking scandal — which Fox ultimately deemed was in poor taste. (On Thursday, Baldwin had tweeted, “I did a short Emmy pretape a few days ago. Now they tell me NewsCorp may cut the funniest line.”)

And the night’s oddest moments came courtesy of the “Emmytones,” a singing group made up of TV actors like Zachary Levi, Wilmer Valderrama, Joel McHale, and Taraji P. Henson. Their sole job was to (awkwardly) introduce each award genre with a snappy tune.

Here are the night’s winners:

Brad Pitt and Johnny Depp to Appear at Cannes