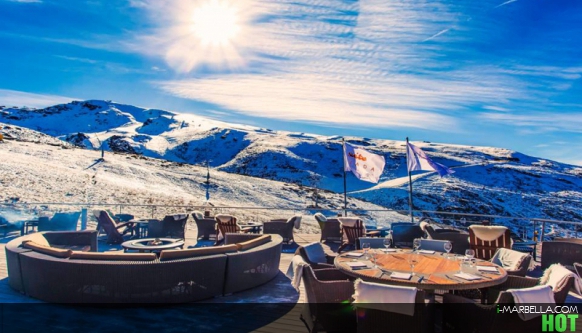 Destroyed by fire in only its second ski season, the hotel has risen from the ashes to re-open.

Shortly before 10:00 a.m. on January 22, 2014, something ignited in one of the chimneys of El Lodge, the smartest hotel in Pradollano, a small ski resort 2,300 metres up in the heart of Spain's Sierra Nevada National Park. It was a Wednesday, and the hotel, only just into its second season of operation, was not full, so the 32 guests and 20 staff were evacuated without a hitch. But such are the mountain roads at that time of year that the fire engines took more than two hours to arrive from Granada, about 40km away, by which time the building was all but destroyed.

"When we first got the call to say it was ablaze, it was just in the roof, and we'd hoped it could be contained, but it continued to burn," remembers Daniel Shamoon, the British founder of MC Hotels, a small but growing portfolio of properties including El Lodge and others in Estonia, Latvia and Bora Bora. "We'd put a huge amount into it -- emotionally and financially -- so there was no doubt in our minds that we'd re-build."

Shamoon was determined that rather than simply rebuild the hotel, they would improve it, lightening the interior and making more of the views. "In a way, this gave us an opportunity to make it even better," he says. Almost two years after the blaze, it re-opened this week.

El Lodge was originally built speculatively in the mid-1970s, in the hope that Juan Carlos, then Spain's new king, might make use of it -- and that his patronage would bring fame and riches to the young resort. As a ski area, it has a compelling case: 107km of pistes that start at 2,100m (the altitude of the highest lifts at some Alpine resorts) and rise to 3,300m on the flanks of Pico Veleta, from which the Mediterranean is visible on a clear day.

But the king disdained it, and the building became a regular hotel then latterly an apartment block. There were, however, other aristocrats in the vicinity busy making the most of the region’s attractions. Among them was Alfonso von Hohenlohe-Langenburg (a playboy prince and godson of Juan Carlos's grandfather, Alfonso XIII), who had, in 1947, paid 150,000 pesetas (about $13,700 at the then-exchange rate) for 18 hectares of prime beachfront real estate in the lee of a mountain that seems to bestow a kind of benevolent microclimate near the pretty Andalusian town of Marbella. Within the decade, he had founded the Marbella Club, now the flagship of MC Hotels and arguably the hotel and community of villas that, for better or worse, kick-started the creation of the Costa del Sol.

Marbella Club suffers another fire in less than a week