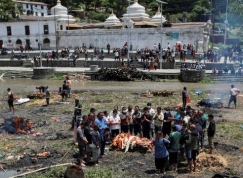 At least 3,617 people are now known to have died in a massive earthquake which hit Nepal on Saturday, police say.

More than 6,500 people have been injured, according to the National Emergency Operation Centre.

Dozens of people are also reported to have been killed in neighbouring China and India.

More than 200 climbers have been rescued around Mount Everest, which was struck by deadly avalanches in the 7.8-magnitude quake.

Officials have warned that the number of casualties could rise as rescue teams reach remote mountainous areas of western Nepal.

A powerful aftershock was felt on Sunday in Nepal, India, and Bangladesh, and more avalanches were reported near Everest. The 6.7-magnitude tremor, centred 60 km (40 miles) east of Kathmandu, sent people running in panic for open ground in the city.