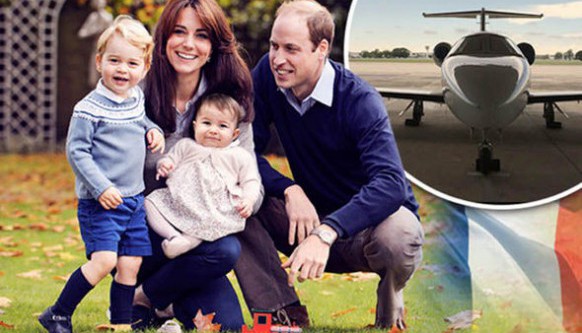 The Duke and Duchess of Cambridge have flown to south-west France with their children on a friend's private jet for a family holiday.

They landed in the small airport of Pau-Pyrenees on Tuesday lunchtime in a £5 million Cessna owned by the Duke of Westminster.

Kate, 34, and others in their entourage were spotted transferring into two waiting blacked-out Range Rovers. Friends have confirmed that William and their children, Prince George, 3, and 14-month-old Princess Charlotte are also with her on the holiday.

A local French newspaper, La Rep des Pyrenees, quoted sources saying the party, which is thought to include the children's nanny Maria Teresa Turrion Borrallo, were going to stay with relatives.

The cost of the holiday will be paid for by the couple but the taxpayer will pick up the tab for the Scotland Yard protection officers who accompanied them on the plane. A separate, advanced party of detectives travelled out before the family and met them at the airport.

After packing up the British-registered cars the party headed off in the direction of north Bearn and Gers.

The couple regularly borrow the Duke of Westminster 's eight-seater jet for private trips and holidays.

The Duke, Gerald Grosvenor, 64, is one of Britain's richest men. He is said to be worth £9.35 billion and his property portfolio includes 100 acres of Mayfair and 200 acres of Belgravia in central London.

His wife, Natalia, is Prince William's godmother while his son and heir, Hugh, became Prince George's godfather at the age of only 22.

The family holiday is confirmation if it was needed that after Prince Charles and Camilla's visit to the Sandringham Flower Show today, the summer season of working in Britain is over for the Royal Family.

On Tuesday it emerged that Prince Harry is to spend the next few weeks working on conservation projects in southern Africa after a similar trip last year.

The fifth in line to the throne, who is not a fulltime working royal but has no other job after quitting the Army in June 2015, arrived in Malawi to begin the project, which aides say is privately funded.

Harry, 31, will work with experts protecting wildlife and people who live near the animals in southern Africa.

One of the projects he will work with is African Parks' "500 elephants" initiative, a plan to move up to 500 elephants to a wildlife reserve in central Malawi from two parks in the southern part of the country.

The elephants are being moved to reduce pressure on the habitat and conflict with neighbouring villagers.

Conservationists hope the reserve may also help restore elephant populations in other parts of Africa, where numbers have significantly declined due to poaching.

Kensington Palace said: "This summer's work will further enhance his personal first-hand experience of initiatives that support some of Africa's most pressing conservation challenges."