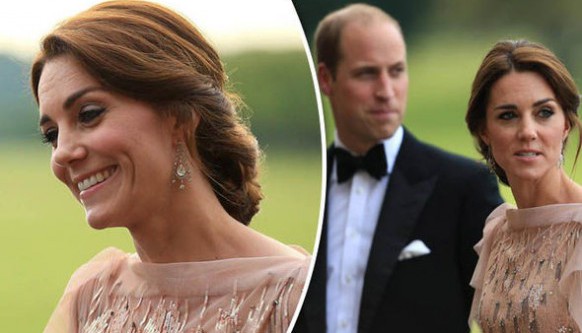 The Duchess of Cambridge suggested her husband was looking forward to a break from her cooking tonight when she and Prince William attended a gala dinner at a stately home in Norfolk.

With a special five course meal prepared by five Michelin -- starred chefs, the Duke of Cambridge knew his luck was in at the dinner at Houghton Hall, three and a half miles from the couple 's 10-bexroom country mansion at Anmer Hall on the Queen's Sandringham estate.

"William has to put up with my cooking most of the time," Kate, 34, told the chefs. "It's the reason I'm so skinny," said William.

The Duke and Duchess were guests of honour at the dinner, which was expected to raise well in excess of £100,000 towards the cost of building a new hospice in Norfolk for the charity East Anglia's Children's Hospices (EACH).

Kate is the charity's royal patron.

Around 80 guests, including some benefactors from America, were at the dinner, hosted by the Cambridges ' friends, the Marquess and Marchioness of Cholmondeley, who own the magnificent Palladian mansion, which stands in 1,000 acres of grounds.

There was no charge for the dinner but guests were invited to make substantial donations towards the appeal for the new £10 million hospice, The Nook, to replace one that is out of date and no longer fit for service.

So far the charity has raised £2.5 million and it hopes to reach its target next year in time to open the new hospice in 2018.

Kate, in a shimmering pink floor-length Jenny Peckham gown she first wore in June 2011, and William chatted with the chefs before a reception outside on the manicured lawns.

He was delighted that England will now play Iceland and not Portugal in the around of 16 tie in Nice on Monday. "We're playing Iceland now on Monday. We're quite happy about that because we didn't want Ronaldo coming into form," the future King, who is president of the FA, said.

The evening began with a champagne reception featuring musical entertainment by the Jefford Brothers and Sam Aldersey-Williams and magician Archie Manners.

Later, the EACH Treehouse Choir performed after dinner followed by a speech from parent Charlotte Markham. Charlotte and her family received care and support from EACH in Ipswich when her son Elliot died at just a few hours old.

EACH Patron and event organiser Emma Deterding said: “Having been a Patron of EACH for over 25 years, I am proud to be part of something so inspirational. I have seen at first hand how incredible and important the development of the children’s hospice movement is since its beginnings in the 1980s.

“I continue to be amazed by how hard EACH works to ensure that hundreds of children with life-threatening conditions and their families in East Anglia get the best care possible. The passion and commitment that the staff demonstrates and the care they offer both in the hospices and the community is inspiring and humbling in equal measure.

“I would like to thank Their Royal Highnesses The Duke and Duchess of Cambridge for agreeing to join us for this amazing evening. Special thanks are also due to The Marquess and Marchioness of Cholmondeley for so generously offering us Houghton Hall as a venue.

“There have been so many companies and individuals who have generously and graciously shown their support. We are so grateful.”

EACH has outgrown its current hospice in Quidenham, due to demand and the changing and more complex needs of the children and young people they care for.

The nook will be built on a five-acre woodland site in Framingham Earl just south of Norwich and will offer services which are either currently unavailable or extremely limited at Quidenham hospice such as a hydrotherapy pool, music studio, large rooms for on-site family support groups, larger and more accessible outside space for children to explore and play and private rooms for one-to-one counselling.