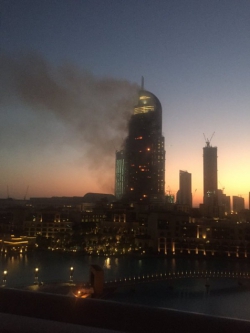 
Firefighters battled a blaze that engulfed a luxury hotel in Dubai Thursday night while a spectacular New Year's fireworks display lit up the night sky nearby.

Orange tentacles of flames engulfed a large section of the high-rise Address Downtown Dubai Hotel soon after the fire started around 9:30 p.m. (12:30 p.m. ET). Witnesses said they heard explosions as the fire raged.

Hours later, dark plumes of smoke billowed from the building as the fire still appeared to be searing several stories.

Bruce Szczepanski, who watched from the balcony of a nearby hotel, said he could still hear parts of the building crashing to the ground more than nine hours after the blaze began.

"There are huge flames, and you can hear the structure falling and the thuds," he said.