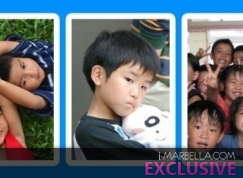 “We are the World” Grammy winning Director Tom Trbovich and Billboard Winning Producer Drew Lane (“High School Musical”) have teamed up for the worldwide launch of the music video "If The Earth Could Speak" with a “Kids Helping Kids: Japan” Red Carpet and “Hollywood’s Rich & Famous Party”.

Join the Presidential Inner Circle at the Rich & Famous Party with Celebrity Guests for the unveiling of the music video and accompanying song called “If The Earth Could Speak” for ‘Kids Helping Kids: Japan' in order to raise awareness and direct donors to: ChildFund International, an international child development organization working to aid children devastated by the 9.0 magnitude earthquake and resulting tsunami which hit Japan on March 11th, 2011.

Hosted by actress and spokesperson for ChildFund International, Evelyn Vaccaro, “If The Earth Could Speak” will be performed by Hollywood’s top teen and child music artists including stars from various Disney and Nickelodeon shows and movies.

This magnificent event, Hollywoods Rich & Famous, is being held in the most sophisticated NEW nightclub with an Internationally recognized DJ, 10 Live Performances including pop sensation The Charlies, Three Red Carpets, a Posse of International Media, Unlimited Free Drinks for an Hour and a Magazine Photo Booth.

Information on the sponsors and organizers of the event including: Presidential Inner Circle's “Rich & Famous” After Party, and the organizers of the Kids Helping Kids Red Carpet (eWorld Music Awards, Momentum Entertainment and Drew Lane Music) can be found at:www.kidshelpingjapan.com

On an ordinary day, ChildFund Japan, a member of the ChildFund Alliance, raises funds for programs it implements in developing countries worldwide. Today is no ordinary day: ChildFund Japan is launching an emergency response in its own country. With support from other members of the ChildFund Alliance, including ChildFund International, ChildFund Japan will attend to immediate physical needs brought about by the shattered infrastructure; food, clean water, shelter and blankets. Equally important though will be the psychosocial support ChildFund will provide for the children who are suffering through this life-threatening situation and will continue to bear its long-term effects.