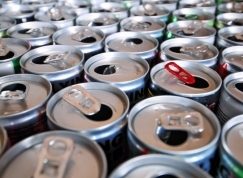 
A couple are saving for their summer wedding – by collecting aluminium cans for recycling. Andrea Parrish (25) and Peter Geyer (29) from Washington, already have more than 18,000 cans in their living room.

The couple said: “Saving the environment and throwing a killer party… what could be better?”

They hope to marry on 31 July this year, which gives them seven months to achieve their target of 400,000 cans. The intrepid pair set up a website to help advertise their mission and have attracted media attention worldwide. Donations have soared during the last week and the couple now have 12 per cent of their goal.

When the couple reach their target they will have about 5 tons of aluminium, worth around $3800 (£2375) when recycled. Many US states encourage recycling by offering a few cents for each can. The couple are collecting cans from their town and will even pick up cans from well-wishers.