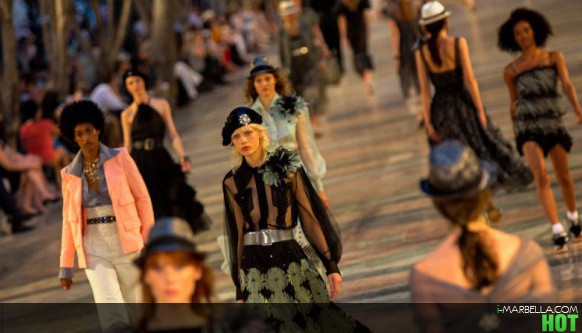 
On Tuesday night, Chanel added to this distorted romanticisation with the presentation of its Resort 2017 collection, a concentration of global wealth taking in the scene along Havana’s Paseo del Prado.

“For us, it is almost dreamlike to think about Chanel in Havana,” Leire Fernández, co-proprietor of the Havana boutique Clandestina, told WWD, but “there isn't really a fashion industry. The Cuban system is based on social needs and values and does not put emphasis on fashion, trends or anything of its kind.”

Karl's version of Cuban Chanel fashion is both rooted in the brand's history -- his interpretation of the iconic and ever-present influence of Coco's designs -- and also not imaginative enough to imagine a Cuba without stereotypes, despite that millennial modern-day Cubans look cool as hell and contemporary as anyone in the States. (Although the proliferation of ringer tees seem directly inspired by this photoshoot.)

Adapted from The Muse