Carter: US "likely behind" Venezuela coup 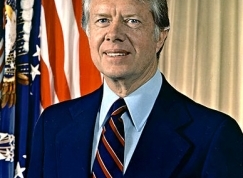 A coup by a civilian-military junta in 2002 removed president Chávez from office, but he quickly regained the position.

"I think there is no doubt that in 2002, the United States had at the very least full knowledge about the coup, and could even have been directly involved," Carter told El Tiempo on Sunday. The Bush administration denied any involvement in the coup. Carter went on to say that it was understandable that Chávez still blames the U.S. for the coup.

Carter also stated his mixed feelings about Chávez, praising him for his social reforms but denouncing him for being uncooperative in making peace with the U.S.