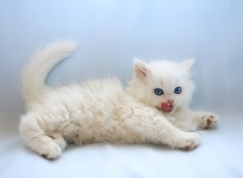 
A British cat was found in Spain three days after he went missing from home. Ginger tom cat Sandi went on his overseas trip to Bilbao after he climbed on board a P+O ferry in his hometown of Portsmouth.

Owner Tim Austin said: "Him being microchipped has been absolutely key to his return - without that he would probably have been put down after they found him."

Sandi was found onboard the ferry by staff three days after her owners Tim and his wife Patricia started a search party. Although he has now safely been returned to his hometown, he will not be allowed back to his owners for six months - because of quarantine laws.

Can you help a Cat in need?