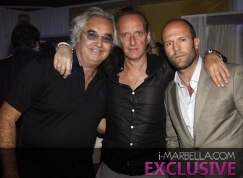 
The Billionaire Grand Prix Gala, held each year during the Formula 1 weekend, has become the most glamorous and memorable event on the F1 Calendar and a favorite of Monte Carlo nightlife.

The Billionaire Club was conceived in 1998 by Flavio Briatore, who wanted a nightclub that could bring back energy and buzz to Costa Smeralda. With intuition, creativity and sharp business sense, Briatore created a place that soon became famous worldwide and a favorite with the International jet set. The Club’s fame has turned Billionaire into a prestigious brand and a synonym for glamour, quality and uniqueness.

For five nights the Billionaire atmosphere is magically recreated inside the renown Fairmount Hotel, each night featuring the best of music and “high speed” fun for an enthusiastic audience which includes the celebrities of Formula One, Fashion and Cinema. This year the event was attended by Jason Statham, Elisabetta Gregoraci, Bernie Ecclestone, Victoria Silvsted, Leonardo DiCaprio, Fidanzata Fabiana, prince Albert II, Naomi Campbell, Beyonce, Philip Green, Timati, Bernie Ecclestone and many more! See the gallery and the video below!