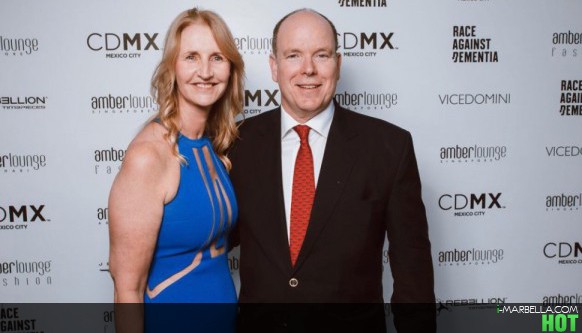 Amber Lounge is the ultimate VIP lifestyle experience at Formula 1’s most exhilarating Grand Prix destinations. where guests celebrated the race weekend with F1 drivers, celebrities, royalty, sports and movie stars at Le Méridien Beach Plaza Hotel, Monaco during the weekend of May 25, 26, and 27 of 2018.

The Monaco Grand Prix 2018 started the Amber Lounge weekend event, kicking off on Friday 25th May with the U*NITE charity fashion after party, Amber Lounge welcomed A-list celebrities including friends of the company. From the warm reception on arrival to the international bands, DJs and dancers all in attendance, Saturday Extravaganza, and Sunday F1 Driver Post Race Party nights will attest that the club’s 15 year anniversary is a roaring testimonial to its well-deserved success.

With 15 years of spectacular non-stop entertainment to celebrate, the official opening of Amber Lounge Monaco 2018 kicked off with U*NITE. The night of fashion, music, and motorsport, powered by the Grammy-nominated singer-songwriter Justin Jesso, whose latest hit ‘Stargazing’ with music producer Kygo has already had over 550 million streams on radio and gone multi-platinum around the world; and Bakermat, a Dutch DJ and music producer.

In the esteemed presence of His Serene Highness Prince Albert II, the evening raised an impressive amount for Race Against Dementia, a charity with the mission to fund breakthrough and innovative dementia research launched by famed Formula 1 driver Sir Jackie Stewart, whose wife of 54 years, Helen, has recently been suffering from the brain disease.

During Monaco’s iconic Amber Lounge fashion show the invited VIP guests could see F1 Drivers and Ladies of F1 on the catwalk, the fashion show started at 19.30

A special collection presentation by headlining designer Alessandra Vicedomini along with Crimson-clad F1 drivers on the runway was everyone’s favorite, keeping the VIP attendees enchanted until dusk. who says “I am working with my team to create a capsule collection that will reflect a perfect combination between our knitwear purism, and the aristocratic glamour around, with a touch of interesting sparkle” The participants witnessed a creative performance with a breathtaking setting and a dynamic Grand Prix atmosphere.

The intoxicating atmosphere was heightened by the special entertainment from CDMX Mexico City, which is the Official Destination Partner of Amber Lounge.

Amber Lounge is the perfect antidote to all that edge-of-your-seat spectating, with two lavish party nights still to come on Saturday, May 26th and Sunday, May 27th. It’s the place where you can rub shoulders with the drivers as they let their hair down after a tough weekend of adrenaline-charged F1 racing.

For the Monaco Grand Prix, 2018 is set three unforgettable nights when the elusive nightclub will host exceptional live performances in a fully revamped interior. Kicking off on Friday 25th May with the U*NITE charity fashion after party, Amber Lounge will welcome A-list celebrities including friends of the company. From the warm reception on arrival to the international bands, DJs and dancers all in attendance, Saturday Extravaganza, and Sunday F1 Driver Post Race Party nights will attest that the club’s 15 year anniversary is a roaring testimonial to its well-deserved success.

Established in 2006 under the patronage of Prince Albert II of Monaco, the Amber Lounge Fashion Show is the only event in the world to feature F1 drivers on the catwalk, modeling the latest designer menswear.

Whether in Monaco, Singapore or Abu Dhabi, Amber Lounge is present at the most prestigious dates in the F1 race calendar.

The love story began in 2003 when Sonia Irvine, sister of Eddie Irvine, ex Ferrari, and Jaguar driver decided to organize a party for Formula ‘s family and their friends, away from the prying eyes of media. Ever since, through following the world’s most fascinating motorsport around the globe, Amber Lounge has become the place-to-be over a Grand Prix weekend be it to network or just let your hair down it all happens at Amber Lounge.