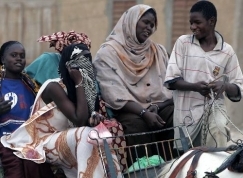 Life in Mauritania is not all guns and bombs as London brothers Sean and Kevin Fuell found during their charity trek / AAP Source: AAP


A PAIR of backpackers who travelled through al-Qaeda strongholds in Africa said they found the areas more hospitable than their native London.

"It was friendlier than London," Sean Fuell, 43, said of the reception he and his brother Kevin received in Mauritania, which is known as a hotbed of Islamic extremism.

The northwestern African country is categorized by the US State Department as high risk.

The Daily Mirror said that Sean and Kevin Fuell completed a 8000km journey from England to the Senegalese capital Dakar for charity and found some friendly faces along the way.

"We'd have a crowd of people round the car because we were like a traveling freak show," said Sean Fuell, who lives in South London.