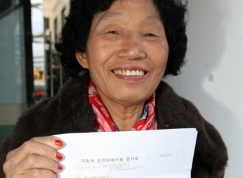 
A woman in South Korea who tried to pass the written exam for a driver's license with near-daily attempts since April 2005 has finally succeeded on her 950th time.

The aspiring driver spent more than $4,200 in application fees, but until now had failed to score the minimum 60 out of a possible 100 points needed to get behind the wheel for a driving test.

Cha Sa-soon (68) finally passed the written exam with a score of 60 on Wednesday, said Choi Young-chul, a police official at the drivers' license agency. Now she must pass a driving test before getting her license, Choi said.

Repeated calls to Cha seeking comment went unanswered. She told the Korea Times newspaper she needed the license for her vegetable-selling business.

Annika Urm Blog: South Korea A place with an excellent chance to grow