A Spanish film opens the 71st Cannes Film Festival celebrated from May 8 to 19, 2018 Gallery 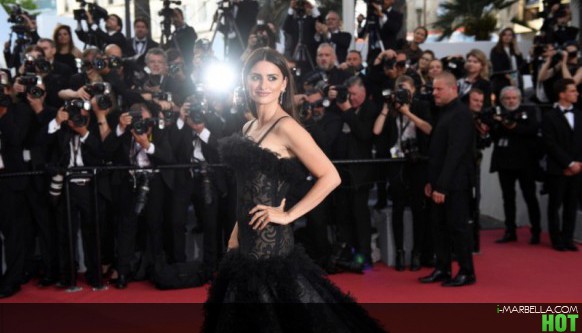 Penelope Cruz at the opening ceremony of the 71st Cannes Film Festival on May 8, 2018 Source: http://i-marbella.com/


The opening ceremony of the 71st Cannes Film Festival, on May 8, 2018. Hollywood has descended on the South of France for the 71st annual Cannes Film Festival being held from May 8 to 19, 2018. Spanish stars Javier Bardem and his wife Penelope Cruz posed on Wednesday during a photocall for the film ''Todos Lo Saben (Everybody Knows).''

Tuesday, May 8, 2018, Protests, Drama, and Parties have been part of the controversial 71st edition of the Cannes Film Festival opening and a dozen of Hollywood stars like; Penélope Cruz, Javier Bardem, Kristen Stewart, Cate Blanchett, Julianne Moore, Celina Jade, Georgia May Jagger Luke Evans, Christoph Waltz, James Norton and more have been part of the opening ceremony, Australian actress Cate Blanchett has been named as the President of the Jury.

This year, Asghar Farhadi's psychological thriller ''Todos Lo Sabe (Everybody Knows)'', starring Javier Bardem, Penélope Cruz, and Ricardo Darín, was set to open the festival, as well as competing in the Main Competition section. This was the second Spanish-language film to open Cannes, following Pedro Almodóvar's Bad Education, which screened on the opening night of the 2004 festival.

The Official festival poster features Jean-Paul Belmondo and Anna Karina from Jean-Luc Godard's 1965 film Pierrot le Fou. It's the second time festival poster was inspired by Godard's film after his 1963 film Contempt in 2016 festival. According to festival's official statement, the poster is inspired by and paid tribute to the work of French photographer Georges Pierre.

The opening of the Cannes Film Festival

The opening started with the presentation of the Spanish film and the Actress Penelope Cruz and actor Javier Bardem who attended the photocall for 'Everybody Knows (Todos Lo Saben)' during the 71st annual Cannes Film Festival at Palais des Festivals in Cannes, France on Tuesday. The Festival rose its curtain on Tuesday with a gathering of movie industry professionals and cinema stars headed from all over the world to the French Riviera.

This year in competition the following films were selected to compete for the Palme d'Or:

There are other competitions like Un Certain Regard,  ''Out of competition'' and Special screenings featuring; Another Day of Life, Dead Souls, The Great Mystical Circus and more.

Members Of The Jury

The Closing film is expected to be; The Man Who Killed Don Quixote from director Terry Gilliam.

''Chopard'' In The Red Carpet

Chopard the Swiss luxury jewelry, and watch brand have been the film festival’s closest partner since 1998 when it redesigned the Palme d'Or, the trophy that honors the best film of the festival. The red carpet serves as the stage for Chopard to unveil its annual Red Carpet Collection of high jewels. This tradition began in 2007 in which Chopard produces one jewel for each year of the film festival’s existence. This year marks its 71st year so Chopard has made 71 jewels that will be unveiled throughout the 12-day festival.

Julianne Moore, one of Chopard’s favorite stars, sparkled in platinum earrings set with 24.89 carats of diamonds and an 18k white gold ring featuring a pair of emerald-cut diamonds (10.11 carats) and pave diamonds

Caroline Scheufele Chopard’s co-president and artistic director, accompanied by her father Karl Scheufele, and Spanish tenor José Carreras wearing a Chopard timepiece, while adorned with a pair of platinum earrings from the Red Carpet Collection featuring two emeralds weighing 101.54 carats and 23.30 carats of diamonds; and an 18k white gold bracelet set with emeralds (25.91 carats) and diamonds (137.09 carats) from the High Jewelry Collection.

May 9, 2018; Day two of the Cannes Film Festival was a total show with; Protests, Fights, and Parties

The traditional climbing of the steps was a political moment for the cast and producer of the Russian film Leto (Summer), in competition at the 71st Cannes Film Festival: its director, Krill Serebrennikov, has been under house arrest in Russia since August of last year due to charges of corruption.

During day two: the weather held, Critics' Week began, and a political statement erupted on the red carpet around the Russian film Leto. A sidebar of drama roiled the Croisette - the seemingly never-ending dispute over the rights of Terry Gilliam's The Man Who Killed Don Quixote, scheduled to close the festival on May 19.

There were press conferences, attacks and counter-attacks and news of Gilliam being unwell in London - but planning to fly to Cannes as soon as possible. On the lighter side, the party cycle has begun. Cannes will always be Cannes.

During the Chord there was also place for Parties and events, a trio of fine gentlemen (Mads Mikkelsen, Luke Evans and James Norton) checked out the Gentlemen's Evening at the Hotel Martinez.

At the party celebrities like Julianne Moore,  Marion Cotillard, Christoph Waltz, Liao Fan and Zhao Tao were seem during the ceremony of arrival.

Since 1939, Cannes has been the city of cinema. The Cannes Film Festival is world famous, born of the combination of a unique location and the magic of cinema. The Cannes Film Festival is the largest international and unique showcase of cinematic art. Every year, for 12 days in May, the small city of Cannes in southern France turns into a meeting place for cinema's directors, actress, actors, etc. Plus the people who report on them. Important to mention that this film festival is not similar to the Oscars: Anyone could be able to submit a film, and every submission has the chance to be viewed by representatives of the international movie industry.

Artistically, it's an anything-goes film showcase that has launched the careers of directors like Quentin Tarantino and Steven Soderbergh. It boasts such diverse events as black-tie screenings and midnight movies on the beach, and it has grown into a fairly intricate system of main events, sidebars and awards.

Find out more about this very important film festival visiting: