A bomb attack in Marrakesh 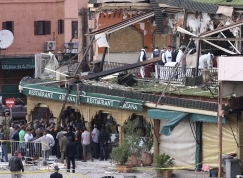 
A bomb attack in the main square in the Moroccan city of Marrakesh has killed 15 people and injured 20, some of them foreigners, officials say.

The explosion ripped through the Argana cafe in Djemaa el-Fna square, a popular tourist destination. The interior ministry said evidence now pointed to a bomb attack after initial reports suggested a gas explosion. Morocco has seen two months of protests against King Mohammed VI amid a tide of uprisings across the region. The last major terrorist attack in Morocco was in 2003 in the city of Casablanca - 45 people, including a number of suicide bombers, were killed.

Moroccan government spokesman Khalid Naciri told French television that Thursday's casualties involved a number of nationalities but he would not confirm any as yet. "We worked... on the hypothesis that this could... be accidental. But initial results of the investigation confirm that we are confronted with a true criminal act," he said.

Mr Naciri later said that "terrorists" were behind the attack but added that it was "too soon" to give more details. A medical source told AFP news agency that 11 of the dead were foreigners, including five women, but this has not been independently confirmed.

Moroccan TV said six French nationals had been killed. Paris has confirmed there were French victims, but gave no further details. The office of President Nicolas Sarkozy condemned the attack as "cruel and cowardly".

King Mohammed has ordered a "speedy and transparent inquiry" into the attack and demanded the public be informed of the results, a royal communique said. Witnesses described hearing a huge blast that sent debris flying into the air.

Briton Hugo Somersham-Jones told the BBC he was at his Marrakesh home, close to the square, when he heard the explosion. "It sounded like a bomb. I went outside and saw smoke and got to the cafe and saw falling masonry. I came out to the main square and saw the first floor of the cafe in ruins. People had fire extinguishers, trying to put out the fire, and others were pulling people out from the building - it was pretty bad."

Mr Somersham-Jones, a hotel owner who has been running his business in Marrakesh for six years, said the square was the main area where people congregate and that there had been a deadly gas explosion last year. Portuguese tourist Alexandre Carvalho told the Associated Press news agency he had seen injured people being carried away. "I believe the injured were mostly tourists, judging by what they were wearing," he said.

The UK Foreign Office said consular staff had been deployed to offer assistance to any British nationals. It said it was also aware of reports in French newspaper Le Figaro that one of the dead was British but could not verify the information.

The Foreign Office has advised UK nationals to stay away from the square. Djemaa el-Fna square is a Unesco World Heritage site and is popular with foreign tourists, particularly Europeans.

Analysts say the blast could have a serious effect on Morocco's important tourism sector. One French businessman told Reuters: "You can't find a more emblematic target than Djemaa el-Fna square. With this attack and amid the worrying unrest in the region, tourism will be in the doldrums for some time."