He will walk Niagara Falls on tightrope! 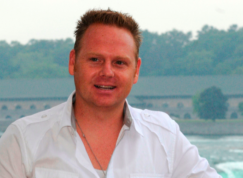 
An acrobat said he was "thrilled to death" after being granted rare permission to walk a tightrope over Niagara Falls.

Nik Wallenda, who comes from a family of circus performers, plans to carry out the stunt this summer. He said he was “thrilled to death” at the prospect. If successful, he will become the first to achieve the feat in 100 years. He will not wear a safety harness for the 1,800ft-long walk, which is expected to take around 40 minutes. The 33-year-old, a member of the Flying Wallendas circus clan, said he had wanted to walk across the falls since he was young and that his mother had made him special suede soled shoes for the occasion.

"My dream is to walk into the mist, disappear, and walk out the other end," he told the BBC. "Contrary to popular belief, it's very peaceful when I'm on the wire. It's just me and the wire. It's relaxing."

Canadian authorities gave Mr Wallenda permission to attempt the stunt this week following months of campaigning as they seek to revive the area’s flagging popularity. He had secured support from the American side of the falls last September, when New York Governor Andrew Cuomo signed a bill giving him one year to carry out the feat. Canada's Niagara Parks Commission reversed an earlier decision and voted unanimously to allow the stunt subject to regulations. However, it also passed a motion saying such an attempt could only be allowed once every 20 years.

Janice Thompson, commission chairwoman, said it would be a unique event.She said: "It's tightly controlled; we're saying it's 'once in a generation'. Why we're actually doing it is to pay tribute to the rich history, the long-ago history, of tightrope-walking and daredevils at Niagara Falls."

Jean Francois Gravelet, known as Charles Blondin, was the first person to to make the tightrope walk in June 1859 and went on to complete it several times. However, his stunt was downstream from the actual waterfall. Mr Wallenda, a father of three from Florida, currently holds six Guinness World Records, including the longest distance and greatest height travelled by bicycle on a high wire.

Suite Brings Fall '13 in With A Dinner Party