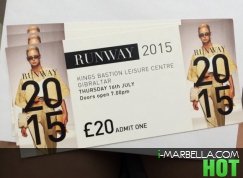 Runway is a European fashion festival that incorporates international and local designers on one catwalk in a Fashion-Week-type of set up. The next Runway event will be held at the King's Bastion Leisure Centre in Gibraltar on July 16, 2015.

From a young age, London-born Romero Bryan aspired to become a world-renowned fashion designer, and he began to hone his skills for design and creation at just twelve years of age. Mr Bryan has fashion in his genes – both his grandfather and uncle were tailors, whilst his grandmother was a seamstress. Mr Bryan's designs first caught the media's attention in 2001, when UK singer Samantha Mumba attended the BRIT Awards in a Romero Bryan dress with a plunging neckline.

Mr Bryan graduated from the London College of Fashion in late 2005, and his career took off soon after. His designs have been worn by A-List celebrities across the globe including Cameron Diaz, Elizabeth Jagger, Kelly Rowland, Destiny's Child, and Usher, to name but a few. Romero Bryan's garments have also been purchased by the likes of Victoria Beckham, Kate Moss, and Katy Perry. Over the years, Mr. Bryan's clientele has broadened and the boy wonder (Vogue.com) has matured into a wonderful young man.

Romero Bryan's talent, hard work, determination, and potential have been recognised by Philip Beresford in the predicted Rich List 2020 compiled for the Royal Bank of Scotland.

The list appeared in international publications such as Forbes and The Sunday Times.

In 2013, Sadie Clayton graduated and exhibited her collection at Graduate Fashion Week, garnering an exciting amount of media coverage. Sadie Clayton had arrived, and the designer stormed on to present her A/W 14 collection over London Fashion Week. The show was attended by the who's who of London’s fashion industry: all wanting to catch a glimpse of this up-and-coming designer's architectural and ornate pieces. The popularity of the collection caught the eye of Ellie Goulding, who wore a Sadie Clayton leather bra top at Glastonbury Festival in front of 900,000 fans.

In 2014, Clayton was invited to present her collection at Berlin Fashion Week, where she made quite an impression with her S/S'15 collection. Sadie Clayton continues to show at London Fashion Week, working in collaboration with an impressive roster of creatives, including cordwainer Charlene Ong, an array of milliners and photographer Mark Lebon.

Within the AW/15 collection, Sadie Clayton demonstrates her uncanny ability to manipulate industrial materials and silhouettes whilst maintaining a feeling of warmth.

This, teamed with Mark Lebon's raw energy and ability to connect with a viewer, resulted in an electric AW15 presentation that captured the attention of i-D, Noctis, 1883 and many more. Sadie's most recent accolade was being chosen to showcase her AW/15 collection at Fashion Scout as part of their Best Emerging Designers exhibition.

Paul Perez is a young and energetic fashion stylist, designer, and blogger.

Gibraltar-born, Paul, 25, has established his name within the fashion industry in Gibraltar and has been tipped by press as 'up and coming', working alongside local celebrities and clients within the creative industry, giving the customer a whole fashion package.

Paul has used his creative instincts and eye for design to create and construct beautiful one-off clothing. His designs and styling have featured in Harper's Baazar India, Essential and Gibraltar magazines; his work has also appeared on TV.

Paul owns his own studio and boutique in Gibraltar and is also currently a fashion blogger on PivotalFashion and is a recent graduate from the University of the Creative Arts Epsom UK. He also plans on networking in the UK fashion community and is seeking expansion opportunities within it.

Tickets are on sale HERE and cost £20 (general admission).