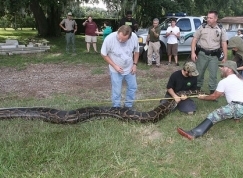 A "monster" Burmese python, weighing in at 400 pounds and stretching 18 feet long, was seized by Florida Fish and Wildlife Conservation Commission officials on Friday after it was deemed unsafe in its cage near Lake Apopka, Florida.

The snake, named "Delilah", is at least 16 years old. Melvin Cheever was caring for Delilah after his brother moved to West Virginia and left the snake behind temporarily. Officials with the Florida Fish and Wildlife Conservation Commission visited the home after a complaint arose questioning the security of the snake's chain-link cage.

"I fed her this morning, gave her seven rabbits. She is as docile as can be. She's as happy as can be," said Cheever.

Officials called it the largest snake they had ever witnessed. Lt. Rick Brown with the organization's investigations section said, "To me it's a Goliath. It's a monster of a snake."

The incident occurs amid fears of snakes following the death of a 2-year-old Sumter County girl who was killed by her family's pet python earlier this summer.

Delilah was transported to a properly licensed caregiver, but is expected to remain there only temporarily.