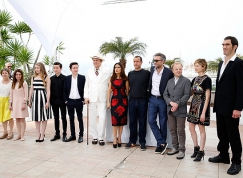 "The Festival de Cannes is a celebration of cinematographic art. We exist to showcase the new writing, new genres and new visual innovations of our time. Every year in May, Cannes gives a sort of snapshot -- both ephemeral and lasting, when one adds up the years -- of what constitutes the art of cinema." -- Thierry Frémaux

The official selection of films for 2015 includes the following screenings: